Question. Describe the young seagull’s expression when he saw his mother with food.
Answer : The young seagull uttered a joyful scream because he thought that his mother was bringing food for him. He tried to come nearer to her as she flew across.

Question. How can you identify the Asian lion and the Bengal Tiger?
Answer : The Asian Lion has a large body and a brownish-yellow colour… It roars loudly when it attacks its prey. The very roar is enough to terrorise one to death. On the other hand, the Bengal Tiger is a noble animal which attacks the prey silently. It has black stripes on its yellow coat.

Question. How does the poet describe the bear?
Answer : The poet describes the bear in a humorous way. He says that as soon as a bear sees a human being, it hugs him tightly. It clasps its prey tightly with both its hands and squeezes him to death. If he is still alive, he gives him another tight hug to kill him.

Question. How did the young seagull and his family celebrate his first flight?
Answer : When the young seagull started flying and got over his fear, his family screamed around him out of joy. They praised him and offered him scraps of dog-fish out of delight as he made a successful attempt.

Question. How does the author describe the young Seagull’s fear of flying?
Answer : The young Seagull was afraid of flying though he wanted very much to fly.
When he flapped his wings he became afraid. The sea stretched down beneath. He felt certain that his wings would never support him. So he bent his head and ran away back to the little hole. He could not get himself to fly like his siblings.

Question. Do you think hunger was a good motivation for the young Seagull in his flight?
Answer : The young seagull was greatly afraid of flying — did not dare to come out and fly — had no self-c confidence – Parents, brothers and sister decided to leave him alone – left for twenty four hours — no food to eat — very hungry — parents rebuked — would die of hunger — getting mad with hunger — mother bought a piece of fish — offered him — but was not able to catch it – called out to her – but she did not come any closer – so he dived for it as he was hungry — fell and started going downwards — next moment wings spread outwards — wind rushed through him — started flying high — screamed with joy as he was finally flying — thus made his maiden flight. 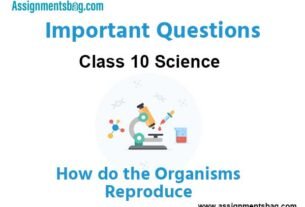 How do the Organisms Reproduce Class 10 Science Important Questions