We have provided CBSE Class 12 Biology Sample Paper with solutions below. These Sample guess papers have been prepared as per the latest examination guidelines and paper pattern issued by CBSE. Students of Class 12 should practice all practice papers for Class 12 Biology given below as it will help them top improve their understanding of the subject. Please click on the links below to access free sample paper for Biology Class 12.

7. Read the following and answer questions from 7(i) to 7(v) given below:
Disposal of untreated sewage into the river or freshwater pond causes huge water pollution. Four water samples from different sources (A, B, C, D) are collected and tested for BOD value in a lab to assess their quality. The BOD values are presented in the given table. Water samples are collected from primary effluent, secondary effluent, untreated sewage and river water. Study the given table and answer the following.

(i) The source of sample ‘C’ is
(a) river water
(b) primary effluent
(c) secondary effluent
(d) untreated sewage water.
Answer : (b)

8. Mention any four important advantages of biogas generation.
Answer : The important advantages of biogas generation are given below:
(i) Biogas can be stored and used more efficiently and economically.
(ii) The energy value of biogas is lower than that of organic matter but due to more efficient handling, the net energy output is roughly equal to the output in direct burning of organic wastes.
(iii) The manure produced in biogas plants is used as fertiliser.
(iv) Biogas use does not add to pollution.

9. (a) Define the term ‘health’. When is “World Health Day” celebrated?
(b) Describe the factors which affect our health.
Answer : (a) Health does not mean “absence of disease or physical fitness”. It may be defined as state of complete physical, mental and social well being and not only absence of disease.
World Health Day is celebrated on 7th April.
(b) Our health is affected by different factors such as:
(i) genetic disorders – deficiencies with which a child is born and deficiencies/defects which the child inherits from parents during birth;
(ii) infections and
(iii) life style including food and water we take, rest and exercise we give to our bodies, habits that we have or lack, etc.

Define interference competition. Give one example that supports competitive exclusion occurring in nature.
Answer : Interference competition is the feeding efficiency of one species which might be reduced due to the interfering and inhibitory presence of the other species, even if resources (food and space) are abundant. One of the example that support competitive exclusion occurring in nature is–
The Abingdon tortoise became extinct within a decade after goats were introduced on the island, apparently due to the greater browsing efficiency of the goats.

12. (a) A farmer adds Azotobacter culture to the soil before sowing maize. How will it increase the yield of maize?
(b) Explain the role of Lactobacillus in preparation of household products.
Answer : (a) Free-living nitrogen fixing bacteria fix atmospheric nitrogen in the soil and make it available for the higher plants. Azotobacter occurring in fields of cotton, maize, jowar and rice, not only increases yield but also saves about 10-25 kg/ha of nitrogen fertiliser.
(b) Microorganisms commonly called lactic acid bacteria (LAB), e.g., Lactobacillus are added to milk for production of curd. They convert lactose sugar of milk into lactic acid. Lactic acid causes coagulation and partial digestion of milk protein, casein, thereby changing milk into curd, yoghurt and cheese. The starter or inoculum used in preparation of milk products actually contains millions of LAB. In this way, Lactobacillus plays an important role in preparation of household products.

13. Who invented polymerase chain reaction (PCR)? Explain its working procedure.
Answer : The polymerase chain reaction (PCR) was invented by Kary Mullis in 1985. The working procedure of PCR is given as : A single PCR amplification cycle involves three basic steps; denaturation, annealing and extension (polymerisation).
(i) Denaturation : In this step, the target DNA is heated to a high temperature (usually 94° to 96°C), resulting in the separation of the two strands. Each single strand of the target DNA then acts as a template for DNA synthesis.
(ii) Annealing : In this step, the two oligonucleotide primers hybridise to each of the single stranded template DNA since the sequence of the primers is complementary to the 3’ ends of the template DNA. This step is carried out at a lower temperature (usually 40° to 60°C) depending on the length and sequence of the primers.
(iii) Extension : The final step is extension, wherein Taq DNA polymerase (obtained from Thermus aquaticus) synthesises the DNA region between the primers, using DNTPs (deoxynucleoside triphosphate) and Mg2+. It means the primers are extended towards each other so that the DNA segment lying between the two primers is copied. The optimum temperature for this polymerisation step is 72°C.

(a) What are cloning vectors. What is their function?
(b) State the role of DNA ligase in biotechnology.
Answer : (a) Cloning vectors are those organisms or their DNAs which can multiply independently of the host DNA and increase their copy number along with the foreign DNA attached to them. Cloning vectors may be plasmids, bacteriophages, cosmids, viruses, etc. Functions :
(i) They help in linking the foreign DNA with that of the host.
(ii) They also help in the selection of recombinants from the non-recombinants.
(b) DNA ligase joins two individual fragments of DNA by the formation of phosphodiester bond between them.

14. (a) Describe the characteristics a cloning vector must possess.
(b) Why DNA cannot pass through the cell membrane? Explain. How is bacterial cell made ‘competent’ to take up recombinant DNA from the medium?
Answer : (a) A cloning vector must possess the following characteristics:
(i) Origin of replication (Ori) : Ori is a sequence from where replication starts and is also responsible for controlling the copy number of the linked DNA.
(ii) Selectable marker : Selectable markers help in selecting transformant host cell from non-transformant ones.
(iii) Cloning sites : A vector must have unique recognition site to link foreign DNA. Presence of a particular cloning/ recognition site enables the particular enzyme to cut the vector DNA.
(b) Competent host is essential for transformation with recombinant DNA. Since DNA is a hydrophilic molecule, it cannot pass through membranes, so the bacterial cells must be made capable to take up DNA i.e., made competent. This is done by treating them with a specific concentration of a divalent cations, such as calcium which increases the efficiency with which DNA enters the bacterium through pores in its cell wall. Recombinant DNA (rDNA) can then be forced into such cells by incubating the cells with recombinant DNA on ice, followed by placing them briefly at 42°C (heat shock), and then putting them back on ice. This enables the bacteria to take up the recombinant DNA. Other methods are:
(i) Microinjection : DNA is inserted through microneedles or micropipettes.
(ii) Electroporation : Electric impulse induce transient pores.
(iii) Gene gun or biolistic : DNA coated with microscopic pellets of gold or tungsten is shot with high velocity into target cells.

(a) Explain the important methods of gene transfer into the host cell without using a vector.
(b) Diagrammatically show steps involved in silencing of specific mRNA in eukaryotes.
Answer : (a) The direct or vectorless gene transfer involves following methods:
(i) Electroporation : In this method, electrical impulses induce transient pores in the plasma membrane of host cell by using lysozyme or calcium chloride through which foreign DNA molecules are incorporated into cells.
(ii) Biolistic method or gene gun method : Biolistic is a means of introducing DNA into cells that involves bombardment of cells with high-velocity microprojectiles coated with DNA. In this method tungsten or gold particles, coated with foreign DNA are bombarded into target cells at a very high velocity.
(iii) Microinjection : It is the introduction of foreign gene directly into nucleus of plant cell or animal cell by using microneedles or micropipettes.
(iv) Chemical mediated gene transfer: In this method polyethylene glycol (PEG) help foreign DNA to enter the host cell.
(b) The steps in RNA interference (RNAi) silencing of mRNA.

15. (a) List any three parameters used by ecologists under different situations to measure the population size in a habitat.
(b) Mention what do the following stand for in the equation given below:
(i) Nt+1 (ii) B and (iii) E.
Nt + 1 = Nt + [(B + I) – (D + E)]
Give an explanation for the above equation.
Answer : (a) Population density means number of individuals present per unit area or per unit volume of the environment in which the population exists. We can find out population density of a habitat by determining the population size.
The different methods to study population size are as follows:
– Quadrat method : It is a method which involves the use of square of particular dimension to measure number of organisms. For example the number of Parthenium plants in a given area can be measured using the quadrat method.
– Direct observation: It involves counting of organisms.
For example, in order to determine the number of bacteria growing in a petri dish, their colonies are counted.
– Indirect method : The number of fishes caught per trap gives the measure of their total density in a given water body.
(b) In the given equation,
Nt+1 = Nt + [(B + I) – (D + E)]
(i) Nt+1 refers to population density at time t + 1
(ii) B represents natality or number of births
(iii) E represents number of emigrants.
From the above equation it is clear that population density increases if the number of births plus the number of immigrants (B + I) is more than the number of deaths plus the number of emigrants (D + E). Otherwise it will decrease.

(a) Explain the species-area relationship using the graphical representation given below. 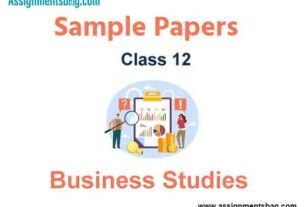