Please refer to Chapter 12 Electricity Class 10 Science Important Questions with solutions provided below. These questions and answers have been provided for Class 10 Science based on the latest syllabus and examination guidelines issued by CBSE, NCERT, and KVS. Students should learn these problem solutions as it will help them to gain more marks in examinations. We have provided Important Questions for Class 10 Science for all chapters in your book. These Board exam questions have been designed by expert teachers of Standard 10.

Question: Which of the following does not represent electrical power in a circuit?
(a) I2R
(b) IR2
(c) VI
(d) V2/R

Question: Two conducting wires of the same material and of equal lengths and equal diameters are first connected in series and then parallel in a circuit across the same potential difference. The ratio of heat produced in series and parallel combinations would be _____
(a) 1:2
(b) 2:1
(c) 1:4
(d) 4:1

(a). Why is the tungsten used almost exclusively for filament of electric lamps?
Answer: Because of its high resistivity and high melting point, Tungsten produces large heat and does not melt at high temperature.

(b). Why are the conductors of electric heating devices, such as bread-toasters and electric irons, made of an alloy rather than a pure metal?
Answer: Because of high resistivity and high melting point of alloys as compared to pure metals

Question: Name a device that helps to maintain a potential difference across a conductor.
Answer: Battery and cell.

Question: Let the resistance of an electrical component remain constant while the potential difference across the two ends of the component decreases to half of its former value. What change will occur in the current through it?
Answer: According to Ohm’s law (V=IR) current is directly proportional to the potential difference across the ends of the conductor if resistance remains constant. Hence current will also decrease to half of its former value i.e. I/2 .

Question 5: How is a voltmeter connected in the circuit to measure the potential difference between two points?
Answer : Parallel.

Question 7: The values of current I flowing in a given resistor for the corresponding values of potential difference V across the resistor are given below:

Plot a graph between V and I and calculate the resistance of that resistor.
Answer:

Question: Draw a schematic diagram of an electric circuit consisting of a battery of two cells each of 1.5 V, 5 Ω, 10 Ω and 15 Ω resistors and a plug key, all connected in series.
Answer: The required circuit diagram is as below :

Question: Why is a series arrangement not used for connecting domestic electrical appliances in a circuit?
Answer: (1) In series arrangement, same current will flow through all the appliances, which is not required for domestic electric circuit.
(2) Total resistance of domestic circuit will be sum of the resistance of all appliances and hence current drawn by the circuit will be less.
(3) We cannot use independent on/off switches with individual appliances.
(4) All appliances are to be used simultaneously even if we do not need them.

Question: Use the data in the table 12.2 and answer the following questions:

From the circuit above, it is understood that 3 Ω and 6 Ω are connected in parallel. Hence, their equivalent
resistance is given by:

All the three resistors are connected in parallel, so resultant resistance (R) is,

Question: What determines the rate at which energy is delivered by a current?
Answer- Electric power.

Now equivalent resistance (R) for the circuit is:

Question: What do the following symbols mean in circuit diagrams?
Answer:

Question: Draw a schematic diagram of a circuit consisting of a battery of 3 cells of 2V each, a combination of three resistors of 10 W, 20
W and 30 W connected in parallel, a plug key and an ammeter, all connected in series. Use this circuit to find the value of the following:
(A) Current through each resistor
(B) Total current in the circuit
(C) Total effective resistance of the circuit
Answer: Schematic diagram of a circuit Battery of 3 cells of 2V each so the potential difference
V = 3 × 2 = 6 V

Question: Consider the scale of a voltmeter shown in the diagram and answer the following questions:

Question: (A) What is meant by the series combination and parallel combination of resistances?

(B) In the circuit diagram given below five resistances of 5 Ω, 20 Ω, 15 Ω, 20 Ω and 10 Ω, are connected as given in figure to a 6 V battery:
Calculate total resistance in the circuit.
Answer: (A) Resistors connected in series: In a series combination of resistors the current is the same in every part of the circuit or the same current flows through each resistor, i.e., there is only one path for the flow of current.
When several resistors are ??oined in series, the resultant resistance of the combination RS equals the sum of their individual
resistances, R1, R2, R3.
RS = R1 + R2 + R3Parallel Combination of resistors: In a parallel circuit each resistor is placed in its own separate branch. A parallel circuit provides multiple paths for the current to flow.
The reciprocal of the equivalent resistance of a group of resistors joined in parallel is equal to the sum of the reciprocals of the individual resistors.
1/RP=1/R1+1/R2+1/R3

What would be the readings of the ammeter and the voltmeter when key is closed?
Give reason to Justify your answers.
Answer: The three resistors are connected in series. The effective resistance of 3 resistors R1, R2 and R3 connected in series is given by.
The effective resistance = 5+ 8 + 12 = 25 Ohm
Total current flowing I in the circuit is given by
Ohm’s law = I = V/R=6/25 A.
As the current flowing through the resistors connected in series is same, the current flowing through the Ammeter = I = 0.24 A.
Reading of ammeter = 0.24 A.
The potential difference V is equal to the sum of the potential difference V1, V2 and V3 across the individual resistors R1, R2 and R3 respectively.
That is, V = V1 + V2 + V3
As the voltmeter is connected across the 12 Ohm resistor or R3, we will calculate the potential difference V3 across R3.
Using Ohm’s law, V3 = IR3 = 0.24 × 12V = 2.88V.
Reading of Voltmeter = 2.88 V

Question: Determine the following quantities for the circuits shown below:

(A) the equivalent resistance
(B) the total current from the power supply
(C) the current through each resistor
(D) the voltage drop across each resistor and
(E) the power dissipated in each resistor
Answer: Given circuit diagram:

Question: (i) Consider a conductor of resistance ‘R; length ‘L;, thickness‘d?? and resistivity  ;5 Now this conductor is cut into four equal parts. What will be the new resistivity of each of these parts? Why?
(ii) Find the resistance if all of these parts are connected in:
(A) Parallel
(B) Series
(iii) Out of the combinations of resistors mentioned above in the previous part, for a given voltage which combination will consume more power and why?
Answer: (i) Resistivity will not change as it depends on the nature of the material of the conductor. (ii) The length of each part becomes L/4. p,A constant.

Question: (A) In a given ammeter, a student saw that needle indicates 12th division in ammeter while performing an experiment to verify Ohm??s law. If ammeter has 10 divisions between 0 to 0.5 A, then what is the ammeter reading corresponding to 12th division?
(B) How do you connect an ammeter and a voltmeter in an electric circuit?
Answer: (A) Least count of ammeter = 0.5/10 = 0.05 A
Thus, value corresponding to 12 divisions = 0.05 ×12 = 0.6 A
(B) An ammeter is connected in series and a voltmeter is connected in parallel in an electric circuit.

Question: In the circuit given below, the resistors R1, R2 and R3 have the values 10 W, 20 W and 30 Ω respectively, which have been connected to a battery of 12 V. Calculate:
(A) the current through each resistor,
(B) the total circuit resistance, and
(C) the total current in the circuit. 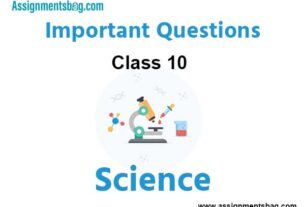 A Tiger in the Zoo Class 10 English Important Questions