1.In the Periodic Table given below, Lithium, Carbon, Oxygen and Neon are placed in their correct positions and the positions of nine other elements are represented by letters. These letters are not the symbols for the elements ?

2. Diamond and graphite show different physical properties although they are made up of carbon and show same chemical properties.
(a) What is the property called?
(b) Give another example of this property of carbon.
Answer. a. Allotropy/ allotropes of carbon.
b. Buckminster fullerene

3. What does the diagram depict?

5. Crossing of a pea plant with purple flower and pea plant with white flowers produces 50 plants with only purple flowers. On selfing, the plants produced 470 plants with purple flowers and 160 with white flowers. Explain the genetic mechanism accounting for the above results.
OR
Differentiate between genotype and phenotype.
Answer. In this breeding experiment ratio of purple to white flowers is approximately 3: 1 in
F2 generation. So the ratio is according to Mendelian monohybrid cross.
This cross also explains
(i) F1 is represented only by dominant trait i.e. purple flowered plants.
(ii) Both the traits show segregation and thus appear in F2 generation.
OR

6. Magnetic field lines around a bar magnet are shown in the figure below. A student makes a statement that magnetic field at point A is stronger that at point B. State, whether the statement is correct or incorrect . Explain.

7. A geographical area contains organisms like snake, grasshopper, peacock, grass and frog. If pesticides was used in this area to kill insects which among the organisms will have maximum amount of pesticide. Name and define the phenomenon involved.
OR
Give reason to justify the following:
(a) The existence of decomposers is essential in the biosphere.
(b) Flow of energy in a food chain is unidirectional.
Answer. Peacock will have maximum concentration of pesticide as it lies at the top of food chain.
Phenomenon- Biomagnification.
Increase in the concentration of pollutant or pesticides at higher trophic levels.
OR
(a) Decomposers function as saprophytes and cleanse the earth from dead remains. Help in recycling of biogeochemicals, recycling of paper, metal etc.
(b) The energy which is capture by autotrophs from sun or energy which passes to herbivores from autotrophs does not come back.

8. Two elements M and N belong to groups I and II respectively and are in the same period of the periodic table. How do the following properties of M and N vary?
(a) Sizes of their atoms.
(b) Their metallic characters.
(c) Their valencies in forming oxides.
Answer. (a) The atomic radii of M is greater than N.
(b) M is more metallic than N.
(c) M has a valency of 1 and N has a valency of 2.

9. The table given below shows some information about four organic compounds P, Q, R and S.

(a) Why are P, Q, R and S classified as hydrocarbons?
(b) Which of these organic compounds belong to the alkane series?
(c ) Based on the information given above, state one characteristic of the alkane series.
OR
(a) State the reason why carbon can neither form C4+ cations nor C4- anions , but forms covalent bonds.
(b) Also state reasons to explain why covalent compounds are bad conductors of electricity.
Answer. a. P, Q, R and S are classified as hydrocarbons, because these compounds are made up of C and H only.
b. C3H8 , C4H10 and C5H12 all have general formula CnH2n+2 thus, all of these belong to alkanes.
c. They have general formula CnH2n+2 and their melting point and boiling point increase with increase in molecular mass.
OR
a. Carbon which has 4 electrons in its outermost shell cannot form ionic compounds by gaining or losing electrons because
(i) if C forms ionic bonds by gaining 4 electrons to attain a noble gas configuration then it would be difficult for 6 protons in the nucleus to hold 10 electrons.
(ii) if C forms ionic bonds by loss of 4 electrons then it would require a lot of energy to remove these electrons from outermost shell.
b. Because they do not have free electrons or ions.

10. The gene type of green stemmed tomato plant is denoted as GG and that of purple stemmed tomato plant as gg . When these two are crossed
(a) What colour of stem would you expect in F1 progeny?
(b) Give the percentage of purple stemmed plants, if F1 off springs are self pollinated ?
(c) In what ratio would you find the gene types GG and Gg in F2 progeny?
Answer. a. Colour of F1 progeny – Green.
b. Percentage of purple stemmed plants in F2 generation is ¼ or 25 %.
c. Ratio of genotypes GG and Gg – 1: 2.

A1, A2, A3 and A are ammeters connected in the circuit. B1, B2 and B3 are three identical bulbs. They all are connected to Voltage source as shown in Figure.
When the three bulbs are working good and glowing, the current recorded in Ammeter A is 6A.
Answer the following:
(a) Same amount of current will go through each bulb and the value is 2A. True or false.
(b) If the bulb B3 is blown away, the bulb B1 and B2 will start glowing more. True of false.
(c ) What will happen to all the ammeter reading if Bulb B1 is blown away.
Answer. a. True
Since Bulb are identical and connected in parallel with Voltage , same current will flow through each bulb. Since total current is 6A , individual current will be 2 A.
b. False
If B3 is blown away, the potential difference across other bulb still remains same, so same current will flow and they will glow as it is . No change.
c. When B1 goes down, the current in that part becomes zero. A1 becomes zero
A2= 2A, A3 = 2A , therefore A = 2 + 2 = 4A.

12. Find the equivalent resistance between points A and B.

OR
In the figure given below, A, B and C are three ammeters. The ammeter B reads 0.5 A. (All the
ammeters have negligible resistance).

13. It is said that there is need to put a complete ban on the products containing aerosols. What are aerosols?
Why is there a demand to put a ban on them?
Name the organization which succeeded in forcing an agreement to freeze CFC production. Also mention the year.

This section has 02 case based questions (14 and 15). Each case is followed by 03 sub- questions (a, b
and c). Parts a and b are compulsory. However, an internal choice has been provided in part c.
Answer. Aerosols are mist producing propellants used in sprays like deodorants, perfumes, after shaves, refrigerants , fire extinguishers etc.
They are commonly made of chlorofluorocarbons which are strongest ozone depleting substance. Therefore there is a demand for putting a ban on them. In 1987, the United Nations Environment Programme (UNEP) succeeded.

14. Raghu often taunts his wife for having only daughters and no son.
(a) As a science student how will you convince Raghu that his wife has no role in giving birth to girls only?
(b) A couple has six daughters. What is the possibility of their having a girl next time?
OR
Pure bred pea plant with smooth seeds (dominant characteristic) were crossed with pure bred pea plant with wrinkled seeds (recessive characteristic) . The F1 generation was self pollinated to give rise to the F2 generation.
(a) What is the expected observation of the F1 generation of plants ?
(b) What is the expected observation of the F2 generation of plants ?
(c) What will be the genotypic ration of F2 offspring , also mention whether it will be homozygous or heterozygous ?
Answer. a. By telling Raghu that sex of the child is determined at the time of conception. Women are homogametic , i.e. they produce only one type of ova (22 + X ) . Males are heterogametic. They produce two types of sperms ,and rosperms (22+ Y ) and gymnosperms ( 22 + X ). The two types of sperms are formed in equal proportion. It is chance factor that gymnosperm fuses with the ovum ( 22 + X and 22 + X) resulting in the female child. The same chance is possible for the second and even the third time. In any case, for the sex of the child, only the father is responsible.
b. The possibility of having a girl or boy child is equal i.e. 50% as 50 % male gametes are Y type and 50% are X type. Fusion of egg with X type sperm will produce a girl child.
OR
a. All of them have smooth seeds.
b. ¼ of them have wrinkled seeds and ¾ of them have smooth seeds.
c. Genotypic ratio = 1: 2: 1
1- homozygous dominant
2- heterozygous dominant
1- homozygous recessive

15. Andre Marie Ampere suggested that a magnet must exert an equal and opposite force on a current carrying conductor, which was experimentally found to be true. But we know that current is due to charges in motion. Thus, it is clear that a charge moving in a magnetic field experience a force, except when it is moving in a direction parallel to it. If the direction of motion is perpendicular to the direction of magnetic field, the magnitude of force experienced depends on the charge, velocity (v), strength of magnetic field(B), and sine of the angle between v and B.
(a) Direction of magnetic force is given by which rule?
(b) Write the statement of the rule? (2 Marks)
(c ) Draw a line diagram to represent this rule.
OR
Two coils C1 and C2 are wrapped around a non-conducting cylinder. Coil C1 is connected to a battery and key and C2 with galvanometer G. On pressing the key (K), current starts flowing in the coil C1. State your observation in the galvanometer. 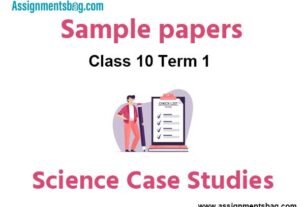