Please refer to the following Chapter 13 Nuclei MCQ Questions Class 12 Physics with solutions for all important topics in the chapter.

Question. The activity of a sample of radioactive material is A1 at time t1 and A2 at time t2 (t2 > t1). Its mean life is T such that:

Question. The alpha and beta particles cause ionisation because of :
(a) photoelectric emission
(b) compton collision
(c) pair production
(d) the electrostatic force ,

Question. In the given reaction

Question. The half-life of a freshly prepared radioactive sample is 2 hours. If the sample emits radiation of intensity which is 32 times the permissible safe level, then the minimum time taken after which it would be possible to work safely with source is :
(a) 8 hour
(b) 10 hour
(c) 16 hour
(d) 2 hour

Question. A particular nucleus in a large population of identical radioactive nuclei survives 10 half lives of that isotopes. The probability that this surviving nucleus will survive the next half-life is :
(a) 1/10
(b) 2/5
(c) 1/2
(d) 1/210

Question. Which of the following is wrong about β+– emission?
(a) Proton convert into neutron
(b) β+-emission is associated with emission of anti-neutrino
(c) β+-emission is caused by decay or π+
(d) No change in masb number due to this emission

Question. Radioactivity can be effected by :
(a) temperature
(b) pressure
(c) radiation
(d) all of these

Question. Half-life period of a given radioactive sample is t. Its average life would be :

Question. What should be the activity of a radioactive sample of mass m and decay constant λ, after time t ? Take molecular weight of the sample be M and the Avagadro number be NA :

Question. Mark the correct option, for the substance which cannot be emitted by radioactive substances during their decay :
(a) electrons
(b) protons
(c) neutrinoes
(d) helium nuclei

Question. a, β and y radiations come out of a radioactive substance :
(a) when it is heated
(b) when put in atomic reactor
(c) spontaneously
(d) under pressure

1. Assertion (A): Density of all nuclei is same.
Reason (R): The radius of nucleus is directly proportional to the cube root of mass number.

4. Assertion (A): The binding energy per nucleon, for nuclei with mass number A > 100 decreases with A.
Reason (R): The nuclear forces are weak for heavy nuclei.

5. Assertion (A): The elements produced in the fission are radioactive.
Reason (R): The fragments have abnormally high proton to neutron ratio.

7. Assertion (A): A neutrino is chargeless and has a spin.
Reason (R): Neutrino exists inside the nucleus.

8. Assertion (A): β-particles emitted in radioactivity are simply very fast-moving electrons.
Reason (R): β-particles are orbital electrons which are emitted by receiving energy from the sun.

10. Assertion (A): The large angle scattering of a-particle is only due to nuclei.
Reason (R): Nucleus is very heavy as compared to electrons.

We hope you liked the above provided MCQ Questions Chapter 13 Nuclei Class 12 Physics with solutions. If you have any questions please ask us in the comments box below. 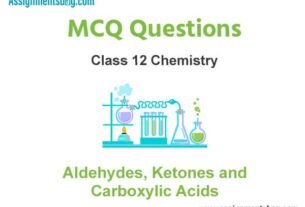