Please refer to the following Chapter 10 Wave Optics MCQ Questions Class 12 Physics with solutions for all important topics in the chapter.

Question. Beyond which frequency, the ionosphere ends any incident electromagnetic radiation but do not reflect it back towards the earth?
(a) 50 MHz
(b) 40 MHz
(c) 30 MHz
(d) 20 MHz

Question. The frequency of a FM transmitter without signal input is called
(a) the centre frequency
(b) modulation
(c) the frequency deviation
(d) the carrier swing

Question. If a radio receiver amplifies all the signal frequencies equally well, it is said to have high
(a) sensitivity
(b) selectivity
(c) distortion
(d) fidelity

Question. An electromagnetic wave going through vacuum is described by E = E0 sin(kx – ϖt) Which of the following is/are independent of the wavelength?
(a) k
(b) ϖ2
(c) k/ϖ
(d) kϖ2

Question. Which of the following rays is emitted by a human body?
(a) X-rays
(b) UV rays
(c) Visible rays
(d) IR rays

Question. Radio waves diffract around building although light waves do not. The reason is that radio waves
(a) travel with speed larger than c
(b) have much larger wavelength than light
(c) carry news
(d) are not electromagnetic waves

Question. A radio station has two channels. One is AM at 1020 kHz and the other FM at 89.5 MHz. For good results you will use
(a) longer antenna for the AM channel and shorter for the FM
(b) shorter antenna for the AM channel and longer for the FM
(c) same length antenna will work for both
(d) information given is not enough to say which one to use for which.

Question. Two beams of light will not give rise to an interference pattern, if
(a) they are coherent
(b) they have the same wavelength
(c) they are linearly polarized perpendicular to each other
(d) they are not monochromatic.

Question. A slit of width a is illuminated with a monochromatic light of wavelength λ from a distant source and the diffraction pattern is observed on a screen placed at a distance D from the slit. To increase the width of the central maximum one should
(a) decrease D
(b) decrease a
(c) decrease λ
(d) the width cannot be changed.

Question. Following diffraction pattern was obtained using a diffraction grating using two different wavelengths λ1 and λ2. With the help of the figure identify which is the longer wavelength and their ratios.

Question. Radar waves are sent towards a moving aeroplane and the reflected waves are received. When the aeroplane is moving towards the radar, the wavelength of the wave
(a) decreases
(b) increases
(c) remains the same
(d) sometimes increases or decreases

Question. A Young’s Double slit experiment is performed in air and in water. Which of the following relationship is true regarding fringe width (β)?
(A) βAIR > βWATER
(B) βWATER > βAIR
(C) βAIR = βWATER
(D) βWATER = 0

Question. When a monochromatic light is passed around a fine wire a diffraction pattern is observed. How the fringe width will change by increasing the diameter?
(A) Fringe width has no relation with the diameter of wire
(B) Increases
(C) Decreases
(D) Fringe width changes with change of wavelength only

Question. Assertion (A): According to Huygens theory no back-ward wavefront is possible.
Reason (R): Amplitude of secondary wavelets is proportional to (1 + cos q), where q is the angle between the ray at the point of consideration and direction of secondary wavelet.

Question. Assertion (A): When a light wave travels from rarer to denser medium, its speed decreases. Due to this reduction of speed the energy carried by the light wave reduces.
Reason (R): Energy of wave is proportional to the frequency.

Question. Assertion (A): Wavefront emitted by a point source of light in an isotropic medium is spherical.
Reason (R): Isotropic medium has same refractive index in all directions.

Question. Assertion (A): No interference pattern is detected when two coherent sources are too close to each other.
Reason (R): The fringe width is inversely proportional to the distance between the two slits.

Question. Assertion (A): Diffraction takes place with all types of waves.
Reason (R): Diffraction is perceptible when the wavelength of the wave is comparable to the dimension of the diffracting device.

Question. Assertion (A): For best contrast between maxima and minima in the interference pattern of Young’s double slit experiment, the amplitudes of light waves emerging from the two sources should be equal.
Reason (R): For interference, the sources must be coherent.

I. Read the following text and answer the following questions on the basis of the same:
In one of his experiments on interference, August Jean Fresnel used a biprism to induce interference between two beams. He split a diverging beam of light into two parts by using the biprism to refract them. This resulted in two split beams which acted as if they were from two coherent sources and which therefore interfered with each other.
A Fresnel Biprism is a thin double prism placed base to base and have very small refracting angle ( 0.5°). This is equivalent to a single prism with one of its angle nearly 179° and other two of 0.5° each.

In Young’s double Slits experiment, a single source is split in two coherent sources. For the Young’s slits experiment, we must approximate that the slits act as point sources. This however is not the case, since the slits have finite width. In this way, it gives rise to unwanted diffraction effects that causes errors. The Fresnel biprism experiment overcomes this problem.
A Fresnel biprism is a variation of Young’s Slits experiment. When monochromatic light through a narrow slit falls on biprism that divides it into two components. One of these component is refracted from upper portion of biprism and the other one refracted through lower portion. Two virtual coherent sources formed from the original source. In this case, two virtual coherent sources are point sources and replace slits in Young’s experiment.

II. Read the following text and answer the following questions on the basis of the same:
Diffraction in a hall:
A and B went to purchase a ticket of a music programme. But unfortunately only one ticket was left. They purchased the single ticket and decided that A would be in the hall during the 1st half and B during the 2nd half.
Both of them reached the hall together. A entered the hall and found that the seat was behind a pillar which creates an obstacle. He was disappointed. He thought that he would not be able to hear the programme properly.
B was waiting outside the closed door. The door was not fully closed. There was a little opening. But surprisingly, A could hear the music programme.
This happened due to diffraction of sound.
The fact we hear sounds around corners and around barriers involves both diffraction and reflection of sound. Diffraction in such cases helps the sound to “bend around” the obstacles.
In fact, diffraction is more pronounced with longer wavelengths implies that we can hear low frequencies around obstacles better than high frequencies.
B was outside the door. He could also hear the programme. But he noticed that when the door opening is comparatively less he could hear the programme even being little away from the door. This is because when the width of the opening is larger than the wavelength of the wave passing through the gap then it does not spread out much on the other side. But when the opening is smaller than the wavelength more diffraction occurs and the waves spread out greatly – with semicircular wavefront. The opening in this case functions as a localized source of sound.

Question. A and B could hear the music programme due to phenomenon named
(A) interference.
(B) scattering.
(C) diffraction.
(D) dispersion.

Question. The minimum and maximum frequencies in the musical programme were 550 Hz and 10 kHz.
Which frequency was better audible around the pillar obstacle?
(A) 10 kHz
(B) 550 kHz
(C) Mid frequency
(D) The complete frequency range

Question. How the waveform will look like outside the door of the hall?
(A) Sound repeater
(B) Sound reflector
(C) Localized sound source
(D) None of the above

Question. Diffraction is more pronounced with ______ wavelengths.
(A) Longer
(B) Shorter
(C) fluctuating
(D) all

Question. Assertion (A): No interference pattern is detected when two coherent sources are infinitely close to each other.
Reason (R): Fringe width is inversely proportional to separation between the slit.

Question. Assertion (A): The phase difference between any two points on a wavefront is zero.
Reason (R): Corresponding to a beam of parallel rays of light, the wavefronts are planes parallel to one another.

Question. Assertion (A): Thin films such as soap bubble or a thin layer of oil on water show beautiful colours when illuminated by white light.
Reason (R): It is due to interference of sun’s light reflected from upper and lower surfaces of the film.

Question. Assertion (A): When the apparatus of Young’s double-slit experiment is brought in a liquid from air, the fringe width decrease.
Reason (R): The wavelength of light decreases in the liquid.

Question. Assertion (A): For identical coherent waves, the maximum intensity is four times the intensity due to each wave.
Reason (R): Intensity is proportional to the square of amplitude.

Question. Assertion (A): Light added to light can produce darkness.
Reason (R): When two coherent light waves interfere, there is darkness at position of destructive interference.

We hope you liked the above provided MCQ Questions Chapter 10 Wave Optics Class 12 Physics with solutions. If you have any questions please ask us in the comments box below. 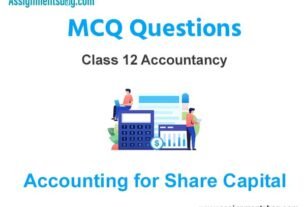