Please refer to the following Chapter 7 Systems of Particles and Rotational Motion MCQ Questions Class 11 Physics with solutions for all important topics in the chapter.

Question. Four particles of masses m1,m2,m3 and m4 are placed at the vertices A,B,C and D as respectively of a square shown. The COM of the system will lie at diagonal AC if

Question. Two spheres A and B of masses m and 2m and radii 2R and R respectively are placed in contact as shown. The COM of the system lies

Question. A solid sphere is rotating in free space. If the radius of the sphere is increased keeping mass same which one of the following will not be affected ?
(a) Angular velocity
(b) Angular momentum
(c) Moment of inertia
(d) Rotational kinetic energy

Question. Angular momentum is
(a) a polar vector
(b) an axial vector
(c) a scalar
(d) None of these

Question. A solid cylinder of mass m & radius R rolls down inclined plane without slipping. The speed of its C.M. when it reaches the bottom is

Question. If a running boy jumps on a rotating table, which of the following is conserved?
(a) Linear momentum
(b) K.E
(c) Angular momentum
(d) None of these

Question. A mass m is moving with a constant velocity along a line parallel to the x-axis, away from the origin. Its angular momentum with respect to the origin
(a) is zero
(b) remains constant
(c) goes on increasing
(d) goes on decreasing.

Question. One solid sphere A and another hollow sphere B are of same mass and same outer radii. Their moment of inertia about their diameters are respectively IA and IB Such that

where dA and dB are their densities

Question. A smooth sphere A is moving on a frictionless horizontal plane with angular speed w and centre of mass velocity v. It collides elastically and head on with an identical sphere B at rest. Neglect friction everywhere. After the collision, their angular speeds are ϖA and ϖB, respectively. Then
(a) ϖA< ϖB
(b) ϖA= ϖB
(c) ϖA= ϖ
(d) ϖB= ϖ

Question. A particle moves in a circle of radius 4 cm clockwise at constant speed 2 cm s–1 . If xˆ and ˆy are unit acceleration vectors along X and Y respectively (in cm s–2), the acceleration of the particle at the instant half way between P and Q is given by

Question. A hollow sphere is held suspended. Sand is now poured into it in stages.

Question. A particle of mass m is observed from an inertial frame of reference and is found to move in a circle of radius r with a uniform speed v. The centrifugal force on it is
(a) mv2/r towards the centre
(b) mv2/r away from the centre
(c) mv2/r along the tangent through the particle
(d) zero

Question. A block Q of mass M is placed on a horizontal frictionless surface AB and a body P of mass m is released on its frictionless slope. As P slides by a length L on this slope of inclination q, the block Q would slide by a distance

Question. A solid sphere and a hollow sphere of the same material and of same size can be distinguished without weighing
(a) by determining their moments of inertia about their coaxial axes
(b) by rolling them simultaneously on an inclined plane
(c) by rotating them about a common axis of rotation
(d) by applying equal torque on them

Question. A stick of length L and mass M lies on a frictionless horizontal surface on which it is free to move in any way. A ball of mass m moving with speed v collides elastically with the stick as shown in fig.

Question. A flywheel rotates about an axis. Due to friction at the axis, it experiences an angular retardation proportional to its angular velocity. If its angular velocity falls to half while it makes n rotations, how many more rotations will it make before coming to rest?
(a) 2n
(b) n
(c) n/2
(d) n/3

Question. What is the moment of inertia of a solid sphere of density r and radius R about its diameter?

Question. Two particles A and B, initially at rest, moves towards each other under a mutual force of attraction. At the instant when the speed of A is v and the speed of B is 2 v, the speed of centre of mass is
(a) zero
(b) v
(c) 1.5 v
(d) 3 v

Question. Moment of inertia does not depend upon
(a) distribution of mass
(b) axis of rotation
(c) point of application of force
(d) None of these

Question. A rod of length L is pivoted at one end and is rotated with a uniform angular velocity in a horizontal plane. Let T1 and T2 be the tensions at the points L/4 and 3L/4 away from the pivoted end. Then
(a) T1 > T2
(b) T2 > T1
(c) T1 – T2
(d) the relation between T1 and T2 depends on whether the rod rotates clockwise and anticlockwise.

Question. 15. A particles performing uniform circular motion. Its angular frequency is doubled and its kinetic energy halved, then the new angular momentum is
(a) L.4
(b) 2 L
(c) 4 L
(d) L/2

Question. A body is projected from ground with some angle to the horizontal. The angular momentum about the initial position will
(a) decrease
(b) increase
(c) remains same
(d) first increase then decrease

Question. A couple is acting on a two particle systems. The resultant motion will be
(a) purely rotational motion
(b) purely linear motion
(c) both a and b
(d) None of these

Question. A ball tied to a string is swung in a vertical circle. Which of the following remains constant?
(a) tension in the string
(b) speed of the ball
(c) centripetal force
(d) earth’s pull on the ball

Question. A simple pendulum is vibrating with angular amplitude of 90° as shown in figure.

Question. Analogue of mass in rotational motion is
(a) moment of inertia
(b) angular momentum
(c) gyration
(d) None of these

Question. Moment of inertia does not depend upon
(a) angular velocity of body
(b) shape and size
(c) mass
(d) position of axis of rotation

Question. A mass is tied to a string and rotated in a vertical circle, the minimum velocity of the body at the top is

Question. A particle of mass m is moving in a plane along a circular path of radius r. Its angular momentum about the axis of rotation is L. The centripetal force acting on the particle is
(a) L2 /mr
(b) L2 m/r
(c) L2 /m r3
(d) L2 /m r2

Question. A uniform bar of mass M and length L is horizontally suspended from the ceiling by two vertical light cables as shown. Cable A is connected 1/4th distance from the left end of the bar. Cable B is attached at the far right end of the bar. What is the tension in cable A?

We hope you liked the above provided MCQ Questions Chapter 7 Systems of Particles and Rotational Motion Class 11 Physics with solutions. If you have any questions please ask us in the comments box below. 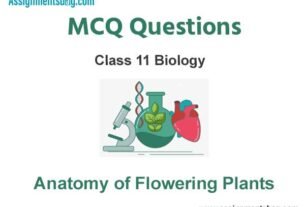