2. The table below gives the pH values of some substances in two columns.

5. The strength of a basic solution can be increased by:
(a) by adding H+ ions
(b) by decreasing OH– ions
(c) by adding OH ions
(d) by reducing H+ ions

7. Which of the following is represent in a chemical change?
(a) Remain constant in temperature
(b) Change in colour
(c) Evolution of a gas
(d) Both (b) and (c)

9. Acid rain water flowing into a river affects aquatic life by:
(a) contaminating the water
(b) lowering the pH of water
(c) increase the pH of water
(d) deposit harmful metals into water bodies

11. Select the correct match below:

13. Roots of the plants absorb water from the soil through the process of:
(a) Diffusion
(b) Transpiration
(c) Osmosis
(d) Both (a) and (b)

14. Study the diagram of the human alimentary canal given below in which four parts have been labelled as A, B, C and D.

Select the options that correctly identify the parts and their functions or structure.
(I) A: Gall Bladder: stores pancreatic juice
(II) B: Liver: Secretes bile juice
(III) C: Pancreas: Secretes pancreatic juice
(IV): D: Large intestines: Site for complete digestion of carbohydrates, proteins and fats
(a) Both (I) and (II)
(b) Both (II) and (III)
(c) Both (I) and (IV)
(d) Both (II) and (IV)

15. Different organisms use different pathways for breakdown of glucose to obtain energy Select the incorrect statements:

16. Which blood vessels have thick and elastic walls?
(a) Arteries
(b) Veins
(c) Capillaries
(d) Lymph

18. A person standing in front of mirror found that his image is of same height. this implies that the mirror is:
(a) concave
(b) plane
(c) convex
(d) either (a) or (b)

20. The diagram below shows the refracted ray QR through a concave lens. What will be the predicted direction for incident ray for such case?

21. A ray of light passes through a prism as shown in figure:

The angle δ is known as:
(a) angle of emergence
(b) angle of dispersion
(c) angle of prism
(d) angle of deviation

26. Equal volumes of hydrochloric acid and potassium hydroxide solutions of same concentration are mixed and the pH of the resulting solution is analysed with a pH strip.

What is the colour obtained in the reaction mentioned in above passage?
(a) Yellow
(b) Red
(c) Yellowish green
(d) Blue

27. During the formation of a compound between two atoms A and B. Atom A loses two electrons while atom B gains one electron.

29. A small amount of a substance X is taken in a beaker and dilute hydrochloric acid is added to it slowly while stirring. The colour of the solution turns blue green.

31. Assertion (A): The acids must always be added slowly to water with constant stirring.
Reason (R): Dissolving an acid or a base in water is highly exothermic reaction.

32. Assertion (A): When hydrogen and nitrogen combines, ammonia is formed.
Reason (R): It is an exothermic reaction.

33. Assertion (A): Mucosal walls of the intestine has numerous villi.
Reason (R): Villi increases the surface area of digestion.

34. Assertion (A): At noon, the Sun appears white as only a little of the blue and violet colours are scattered.
Reason (R): Near the horizon, most of the blue light and shorter wavelengths are scattered away by the particles.

35. Samples of silver, copper, PVC and graphite were taken and placed one by one between the terminals A and B as shown:

37. The part of nephron that filters the blood passing through it is:
(a) Bowman’s capsule
(b) Glomerulus
(c) Renal artery
(d) Collecting duct

39. The refractive indices of four media are given in the table below:

42. In the human heart, the oxygen rich blood from the lungs first comes to:
(a) Left atrium
(b) Left ventricle
(c) Right atrium
(d) Right ventricle

43. Which of the following are not uses of concave mirror:
(a) In search lights
(b) In vehicle head lights
(c) As rear view mirror
(d) As shaving mirror

44. Four students completed the ray diagram of a ray passing through the focus of a convex lens.

47. If an object is kept 40 cm in front of a concave mirror of focal length 20 cm, then the position and nature of the image will be:

Q. 49 to 52 are based on Case Study–1
Case 1: A chemical equation is the representation of chemical change in terms of symbols and formulae of reactants and products. The substances which react are written on the left hand side of the arrow and are termed as reactants while the substances produced as result of reaction are called products and are written on the right hand side of the arrow.
The arrowhead shows the direction of the reaction.
A chemical equation in which the number of atoms of each element on reactant side is equal to that on the product side is said to be balanced.

51. In which of the following equation, the mass is not same on both the sides?
(a) Word equation
(b) Skeletal equation
(c) Balanced equation
(d) Both (a) and (b)

Q. 53 to 56 are based on Case Study–2
Case 2: Green plants absorb light in their leaves and convert it to energy by photosynthesis Photosynthesis is a process by which green plants, having chlorophyll, synthesize the simple sugar (glucose) from the simple raw materials water and carbon dioxide using the energy of sunlight.
Oxygen is released in this process. Though all green parts of a plant are capable of performing photosynthesis, the leaves are the most suitable organs for this process.

54. The carbohydrates which are not used immediately by plants is stored in the form of :
(a) Glycogen
(b) Starch
(c) ATP
(d) ADP

55. Which of the following are functions of stamata:
(I) Exchange of gases
(II) Transpiration
(III) Prevents loss of water at night
(IV) Translocation
(a) Both I and II
(b) Both I and III
(c) I, II and III
(d) I, III and IV

Q. 57 to 60 are based on Case Study–3
Case 3: Mirror formula is a relation between object distance (u) image distance (v) and focal length (f ) if a special mirror, it can be written as:

Where R is the radius of curvature of the mirror. The formula is valid in all situations for spherical mirrors for all position of the object.
Consider the case, in which a mirror forms a real image of height 1 cm of an object of height 1 cm placed 20 cm away from the mirror.
Mirror formula is a relation between object distance (u), image distance (v) and focal length (f ) in a spherical mirror.

This formula is valid in all situations for a spherical mirrors for all positions of the object.
Consider the case in which mirror forms a real image of height 1 cm of an object of height 1 cm,
placed at 30 cm away from the mirror. 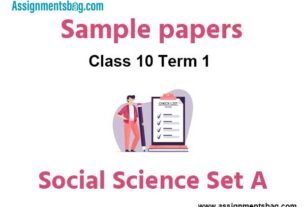